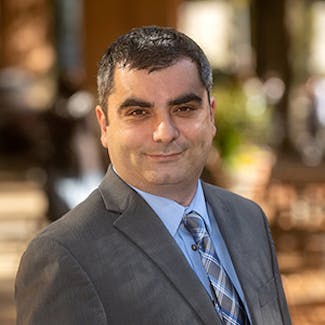 Elnur Veliev graduated from the University of the District of Columbia David A. Clarke School of Law in 2007. While in law school, Elnur practiced as a student attorney in the HIV/AIDS clinics, where he represented low-income D.C. residents seeking social security disability benefits. He also practiced in the Community Development clinics, where he assisted D.C. residents with establishing small businesses and preparing applications to obtain patents from the U.S. Patent Office.

Elnur has been practicing law in Maryland since 2012 and is also licensed to practice in the U.S. District Court for Maryland.

Prior to entering law school, Elnur graduated with a Bachelor’s Degree in Government and International Politics from George Mason University. After graduating from law school, he worked as a senior account executive at a marketing company in Bethesda, Maryland.

Elnur was born in Azerbaijan and moved to the United States when he was ten years old. He has lived in the Washington, D.C. metropolitan area for the past 24 years and is married with a ten-month-old daughter. He is fluent in Azeri, Turkish and Russian and speaks conversational Spanish. Elnur’s hobbies include reading, watching soccer and traveling.

Elnur has been recognized as a top litigator in Maryland for five years in a row. He has received the preeminent honor of being selected to the Super Lawyer Rising Star list for Maryland from 2018 – 2022. The Super Lawyer Rising Star honor is given to outstanding lawyers from more than 70 practice areas who have attained a high degree of peer recognition and professional achievement. This award is only given to 2.5% or less of attorneys in each state.

The law office of Greenblatt & Veliev has 40 years of combined personal injury law experience that will guarantee you a strong voice in settlement negotiations and trials. Our top-rated, Super Lawyer attorneys offer personal, 24/7 service to each client and will never stop working to obtain the most favorable outcome possible. Your best interests are always our top priority. Contact us today.

Greenblatt & Veliev, LLC provides dedicated legal representation to clients in Maryland, Washington DC, Virginia, and Pennsylvania. Our attorneys have more than 65 years of combined experience in personal injury cases, and use this knowledge to serve you. Our professional affiliations and memberships include: